In the meantime, Wade and Angie work to persuade Justin of their connection as Nazeem struggles with his emotions. Bennie wants to ask Linda a crucial question.

When Zoe boards an earlier trip to Boston, everyone is taken aback. Wade almost gets caught in his lies when Bennie wants to plan a party.

Linda and Bennie make an effort to demonstrate their commitment to their choice. While someone unexpectedly appears in Ruiterbosch, Wade and Angie wish to make their relationship public.

Nazeem displays his affectionate side. With Angie back in the picture, the atmosphere in the Daniels’ home becomes awkward, and Linda takes control.

Chris, Elana, and AB prepare for combat as Bennie makes an effort to cope with his life’s upheavals. Ty makes the decision that enough is enough, and Zoe once more realises that she must chose.

Being accountable puts pressure on Bennie. While the braai challenge is about to begin, Nazeem avoids eye contact.

Bennie struggles with the choice of whether or not to relocate. When Nazeem attends Bridgette’s gathering, things become uncomfortable. Ty regrets how Angie’s situation transpired.

While Linda makes a bold choice, Nazeem tries to impress someone. Elana argues with Chris,and Angie reveals something shocking to Wade…

Lee-Ann confronts Nazeem as she quickly assembles a puzzle. Wade is inconsolable about Angie, and she overhears something unsettling. Bennie experiences a difficult realisation.

Tim is made to think by Nazeem’s actions. Angie struggles with her conscience as she learns what Carlo is doing, while Linda makes a significant decision regarding her relationship with Bennie.

Ty wonders why Carlo views Angie as his idol. Bennie begins to leave Linda behind while Zoe finds herself in a very challenging circumstance.

Ty thinks it’s time to set things right, while Chris gets an unexpected start to his day. Zoe tries really hard to keep her secret safe, but will she succeed?

The future appears bright for Nazeem. Ty puts his money where his mouth is while Chris tries to make sense of Kate’s moodiness.

Nazeem’s covert schemes advance, but Lee-Ann is committed to stopping them. While Chris and AB learn what’s going on with Kate, Angie obtains a new job.

Rhafiek is still confused of where he stands with Kaashifa, while Lee-Ann is on the attack. Ty does Angie a great favour, but Kate can’t go asleep.

Lee-Ann despises herself for needing to lie on someone else’s behalf. Angie struggles to make a living, while Kaashifa and Rhafiek still find it awkward to be around one another.

When Tim sets up an impromptu date, Zoe is compelled to change her plans. While Kaashifa reaches a determination regarding her future with Rhafiek, Chris and Kate’s marriage is put to an unprecedented test.

Angie has an opportunity to land a career, while Nazeem is determined to follow his heart. Kaashifa and Rhafiek had reached their breaking point.

Angie is sceptical as Kaashifa makes a huge leap of faith. is presented with an unexpected opportunity. Zoe makes a shocking decision… Better days for Imbewu’s seed After Season 5, Imbewu’s seeds are dispersed. Seeds of imbewu for The Black Door Although we could, we won’t torment you any further. All this, and Imbewu no longer even has The Seed as its subtitle. You might remember that was eliminated in 2020 for Season 3 of the programme….

Scandal! Episode 219 for February 1, 2023 A happy moment encourages a disgruntled lady to join the evil side. The privileges of a newlywed are restricted. Nhlamulo makes a surprise announcement for his boys. Episode 220 for February 2, 2023 When Mbali discovers how far she must travel to achieve her goals, she is concerned…. 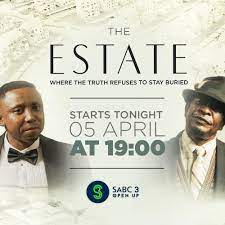 The Estate 3 Episode 128 for February 1, 2023 Castro makes an effort to negotiate with Dumisani. Thobekile is questione by Lesiba on her friendship with Castro. Jo follows Nora’s lead. Episode 129 for Thursday, February 2, 2023 Tsholo is unrelenting in her search for Muzi’s truth. While Castro makes preparations to usurp Sinama’s authority,…

Episode 593 for February 1, 2023 Mrs. Kumar isn’t the kind, understanding wife we thought she was, Zondo tries to repair her marriage, and Bafana may freely cross Casanova Street without being stopped. Episode 594 from February 2, 2023 Zondo tries to reach out to Thabo to mend their marriage but he pushes her away…. Diepe Waters Episode 71 for February 1, 2023 Karla’s uneasiness must be controlled by Rossouw and Anja while Gys vents his resentment on Johan. Wim gives Sanet some counsel, and Nina begs him for a favour. Episode 72 for February 2, 2023 Meghan is curious about Gys’ true identity. Not everyone has a bad mood,…